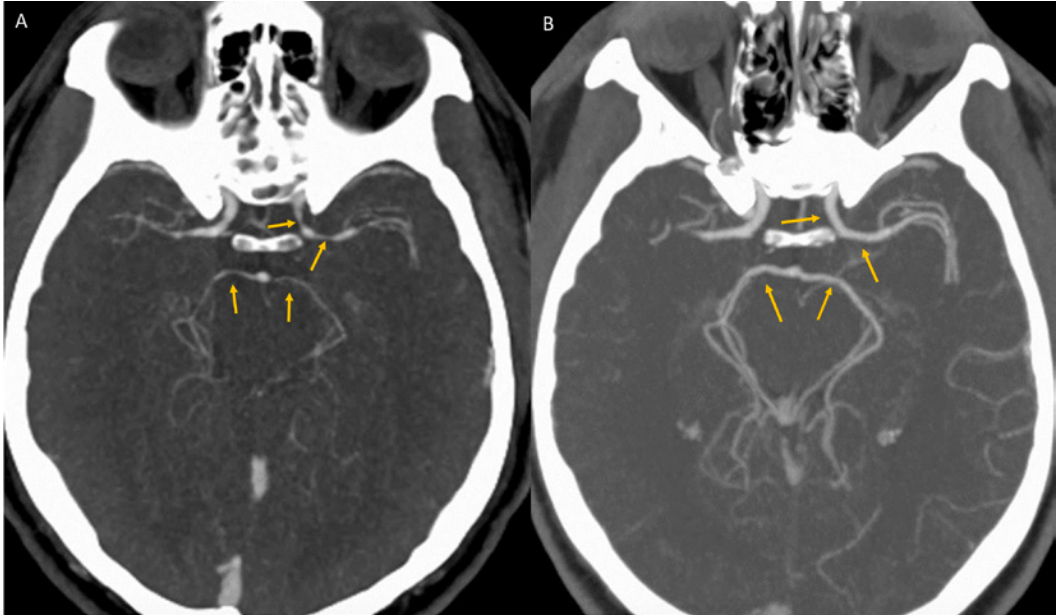 A 34-year-old man presented to the ER after an episode of thunderclap headache. His symptoms began with dry heaves immediately after participation in a hot pepper contest where he ate a ‘Carolina Reaper,’ the hottest chili pepper in the world. He then developed intense neck and occipital head pain that became holocephalic. Physical examination revealed blood pressure of 134/69mm Hg and no neurological deficits. Non-contrast CT head and neck were unremarkable. CT angiography revealed no aneurysm but demonstrated multifocal luminal narrowing in the left supraclinoid internal carotid artery, M1 segment of bilateral middle cerebral arteries, and P1 segments of bilateral posterior cerebral arteries consistent with vasospasm (image A). A presumptive diagnosis of thunderclap headache secondary to reversible cerebral vasoconstriction syndrome (RCVS) was made. The patient’s symptoms improved with supportive care. Repeat CT angiography 5 weeks later demonstrated resolution of luminal narrowing consistent with RCVS (image B). No cases of RCVS secondary to peppers or cayenne have been previously reported, but ingestion of cayenne pepper has been associated with coronary vasospasm and acute myocardial infarction. Given the development of symptoms immediately after exposure to a known vasoactive substance, it is plausible that this patient had RCVS secondary to the ‘Carolina Reaper.’